“On Thursday December 18th, students in grades 2-4 performed the winter themed musical FLAKES! by John Jacobson and John Higgins for their families. The students had been working on the musical since November and were excited to finally show off all of their hard work! The show required the students to learn 5 original songs, movement to go with the pieces, and memorize speaking parts to help tell the story of Snow and Snirt as they help the Littlest Snowflake see how no two flakes are alike and they are all special in their own way.  Ms. Riddle is proud of the students work and hoped that everyone in attendance enjoyed the show!” 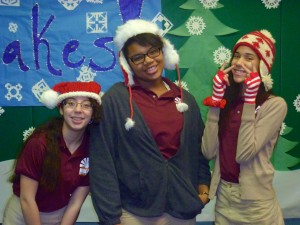 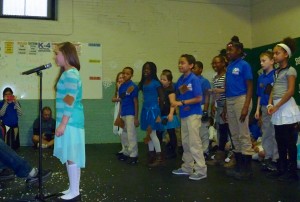 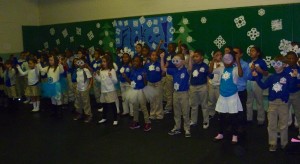 “The students at Horizon Denison Elementary have been busy preparing music for our Veterans Day Program (Nov.11) and our Winter Performance(Dec. 12) For the Veterans Day program we collaborated with our art teacher to make props and costumes with a patriotic theme. For our winter performance, the Kindergarten and first graders will perform Snoozy Snowflake. Second and third graders will perform Flakes, A Mini-Musical. Fourth Graders will play winter party songs on their recorders, and the fifth graders will sing and dance to winter music. Earlier in the school year, our lessons included:  Carnival of the Animals/Orchestra Instruments (k), Sol-Mi Melodies and Singing Games (1st), Football-Themed Rhythms (2nd), Singing Rock and Roll Music (3rd), Rhythmic Recorder Games (4th) and Sharps/Flats/Major Scales (5th). We also have a singing club that meets once a week, and we will soon be holding auditions for our spring musical.” 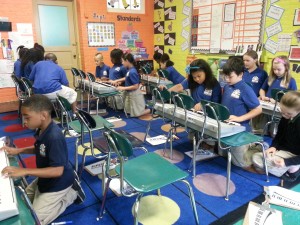 Jessica Keider: Noble Academy -Cleveland
“Over at Noble Academy Cleveland we currently are wrapping up an American unit where we learned several patriotic songs and we will perform those for the school’s Veteran’s day program on Tuesday. We are also preparing for the school’s first ever concert; grades K-4 are all preparing winter songs and will perform them on the evening of December 11th!”
Erin Broderick: Horizon Science Academy – Youngstown
“At Horizon Youngstown, my 3rd-5th grade classes worked in groups and performed in class Spooky sound effects using different percussion instruments for the story Hairy Toes during Halloween. Right now, we are working on my Christmas show for K-5 called “Holiday Playlist” where students will be singing, dancing, and playing instruments. Also this year, 3rd-8th graders are getting ready for our very first school Talent Show. We will be starting auditions in January and my band and Choir students will be performing some pieces as well.”
Carrie Oldacre:  Noble Academy-  Columbus
“Noble Academy Columbus had Opus One visit, a Jazz ensemble from Otterbein University.  Opus One is lead by Dr. Gayle Walker who is also the head of the choral department at Otterbein University.  Opus One gave students the chance to see instruments performed that they had never seen live such as guitars, a cajon drum (which is a box that is a drum), and a professional pianist.  They also got to hear college musicians singing jazz which they aren’t often exposed to at home or even during their music classes.  At the end of the performance one of the performers lead the students in singing a song” 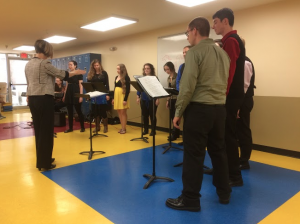